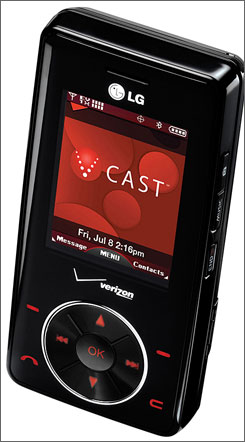 It is far better to have a music player that also acts as a phone. It is that simple. But most people wither disagree or they don’t want a clunky music playing phone – they prefer a sleep iPod Mini. Well now that Verizon Wireless has decided to carry the LG Chocolate phone – a sleekly designed model resembling a music player more than a phone, the world may be about to change. Couple this with more consumer friendly pricing and you have a recipe for some serious iPod killing chocolate.

I have heard great things about these Chocolate phones by the way. They are all the rage in Asia and as usual in the US we get the best toys last.

One last note – I have repeatedly slammed Verizon Wireless in years past due to their poor selection of devices. They seemed to have listened and are doing an awesome job of competing with leading-edge devices such as this phone and the Motorola Q.